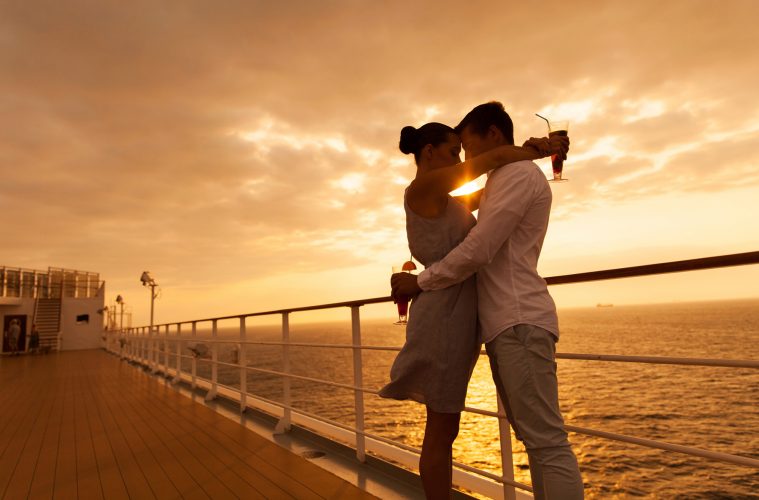 World record for couples getting hitched on a cruise this Valentines

When Simone wed fiance Claudio Pighini onboard the Golden Princess in 2017, all 40 family and friends joined them on board for the novel occasion.

“We didn’t want to have a wedding in Sydney – it’s just too expensive, but a cruise wedding was a fraction of the coast and we still got to have our wedding photo with the Sydney Harbour Bridge as the backdrop,” says Simone,  of the 21 September ceremony. But that wasn’t the only novelty.

“My husband Claudio had never cruised before…so he was a bit unsure! But his parents cruise all the time and he just had to trust me. He’s been on two cruises since our wedding and I think he is still getting used to it.

“All our family love cruising too… as a family we’ve been cruising loads before. But the wedding was special because it was something a little bit different for everyone, not your standard wedding,” says Simone.

While theirs is a gorgeous love story Simone, who works  in event management, says the cruise event took a bit of organising, as did their pairing.

“I was single for many, many years… I’m not one to go out all the time. Then one day a relative of ours (a cousin)  met Claudio on a job site – and they became friends. The first time I met him, I thought ‘I’ve just met my future husband’. But it wasn’t until three years later that we actually got together,” she says. “The best part about the ceremony was having a smaller more intimate wedding and having our nearest and dearest with us for the whole cruise. It meant plenty of planning and we gave people plenty of notice, but it was worth it,” Simone says.

So, was it legal under Australian marriage laws? “Yes, a celebrant came on board, and we had to do it while the ship was still in port to make it legal, before we sailed into international waters.

“I loved it also because it was stress free. The people on the ship took care of all the details, including the photographer. And the cost was a big factor, it didn’t cost anywhere near a normal wedding – and the honeymoon is in the cruise itself.”

The couple were then able to enjoy 11 nights cruising the South Pacific aboard Golden Princess.

“It went to Champagne Beach in Vanuatu. We sat and had coconut crab, that was the highlight of the cruise for me,” she says.

“We have kids now and for us it’s going to be a future of family cruises. We have another cruise booked for next year with 11 cabins booked for a cruise to PNG on the Sun Princess with family and friends… it feels like an anniversary every time we step on board a Princess cruise.” Getting hitched on the high seas has proven to be a crowd-pleaser with Princess Cruises too, the premium cruise line becoming known for its focus on romance.

This Valentine’s weekend, Princess Cruises will be holding a second cruise, sailing from Los Angeles to Mexico, to break the Guinness World Record title for the largest multi-location vow renewal.

This year’s view renewal ceremony will be onboard the Royal Princess, setting sail from Los Angeles on 10 February for a five-night, round-trip cruise to Mexico. One highlight of the cruise will be an overnight stay in Cabo San Lucas, which boasts the aptly named ‘Lover’s Beach’.

Princess have been offering guests the chance to renew their marriage vows on board their cruises for many years and a handful of Aussie passengers have been among  the guests who’ve declared their love at sea and would recommend the experience.

Another Australian couple who took the plunge was Dallas Sherringham who married 65-year-old Sharon on board the Ruby Princess on 14 October last year. Dallas has just turned 70 and says with a smile, “It was like a seniors’ wedding.” This was Dallas’ second marriage after losing his first wife to ovarian cancer more than a decade ago. Sharon and Dallas first met via the internet, which Dallas says “in our day (it) was considered risqué”.

“She had to be able to put up with me and have a sense of humour,” he says candidly. “Luckily she had had a few glasses of wine the first time I called her.”

Dallas proposed to Sharon while on a tour of the Grand Canyon. “I thought to myself, I can always jump if she says no!” he says with a laugh. She said yes, of course.

“We were originally going to do a Vegas wedding, but we decided to do it on the ship. We didn’t want the hassle of big family. I’ve been on over 100 cruises,” he says.

The couple, who now live on the NSW Central Coast sailed from LA to Sydney for their wedding cruise.

“Between Hawaii and Fiji, I wore a tropical shirt. Sharon bought a lovely dress in Hawaii that she wore for the wedding. The cruise passenger manager organised everything for us,” he says. “On the day, they delivered flowers to our room, for Sharon’s bouquet. We got married in the chapel and a couple we met on board became our best man and bridesmaid! We’re still friends.

“The captain gave Sharon away and the service was conducted by him also. Afterwards we had champagne with the captain, who hung around with us and was so relaxed. Then he invited us up to the bridge where we had our photos taken. They did a really good job.”

The happy couple then had dinner at the chef’s table at SHARE, celebrity chef Curtis Stone’s restaurant onboard Ruby Princess.

“It turned out to be something that I’ll always remember. All the other weddings I’ve been to just blur into one but this one, we walked around the ship for a few days feeling very special.”

And they haven’t stopped cruising since. “Sharon and I have been cruising together for the past 10 years. We’ve done about 10 now. She now loves it more than I do.”

Dallas and Sharon have booked their next cruise with Princess to head to bushfire-damaged Kangaroo Island in South Australia where they plan to help out the local community in need. After that, they plan on either cruising to Alaska or the Mediterranean.

If you miss out on this year’s Guinness World Record vow renewal ceremony, hold on to your bouquet, because Princess offers guests the chance to celebrate their marriage (or renewal of vows) year round on any sailings. In fact, they offer three different options for couples seeking a unique experience.

Perfect if you’ve always dreamed of being married at sea and by the ship’s captain:

If you have non-sailing guests:

If you would like to be married ashore at an exotic destination:

In a fun twist, The Love Boat stars Gavin MacLeod, who portrayed Captain Stubing on the TV show will officiate the ceremony with his on-screen daughter, Jill Whelan, who played Vicki, who will be serving as matron of honour for couples on the Regal Princess.

The mass renewal of vows ceremonies will take place simultaneously on 11 February 2020 with two official Guinness World Records adjudicators on each ship to verify the record.