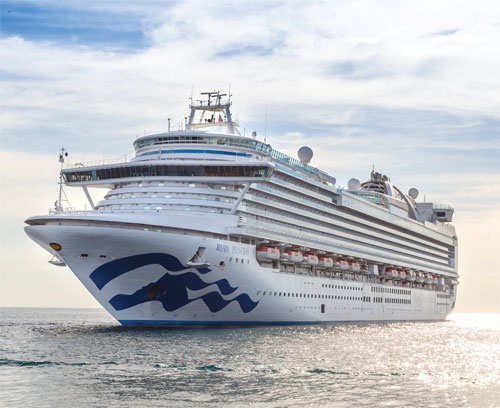 How you could score a free cruise and more with Princess

The airline industry has been doing it for years: overbooking flights, then offering passenger great deals to accept alternative flights. Now, as cruise continues to boom, some lines are doing the same.

The Cruise industry has coined a quaint phrase for it: “Move over offers.” In other words, you get a very special offer if you’ll just move off that packed itinerary to another.

They are not to be confused with upgrades and downgrades, which allow passengers to sail on their booked journeys in a different cabin. Downgrades also usually come with some form of compensation.

Princess Cruises appears to operate move over offers most often.

“We have had four move over offers in last 16 months. We took three of them,” writes Amanda Kennish from Brisbane on Facebook.

“Carnival Cruise Line endeavours to ensure that all guests who make a booking sail with us. They are looking forward to their holiday and we would never want to disappoint them. We very closely manage the inventory on every sailing up until the day of departure,” says the line.

How does it work?

For some, that last minute call can be very good news indeed!

Move over offers are only available for a very limited time (it can be as quick as within a day or two). Princess Cruises states that they are accepted on a first-come-first-served basis. So far, we found that they can be made from 18 days prior to sailing and up to the embarkation day itself.

For Princess Cruises, once passengers accept the offer, they will receive 100 per cent of their cruise fare back as refundable onboard credit, their next Princess Cruise is free and a sum for changing flights and out of pocket expenses. Some offers also include a complimentary upgrade pending availability.

“Usually they refund the full fare by crediting to your onboard account and then sending a cheque for whatever is left over,” writes Princess cruiser Carol Williams on Facebook. And she has taken up Princess’ offer a couple of times.

“Sometimes they suggest a few departures to choose from others and the client has time to choose an alternative,” says Barry Downs, Sales & Marketing Manager at Bicton Travel.

However, he adds that it is not a regular occurrence for his Fremantle clients to receive such offers, but when it is offered, the offer is very generous.

Should I take it?

Many cruisers have taken up the offer as they are great deals. For example, Princess cruiser Debbie Robertson took the offer, booked the same New Zealand to Sydney itinerary sailing at a later date and went from inside cabin on the Diamond Princess to balcony cabin on the Majestic Princess.

Sydneysider Antonique Flatt who was originally booked on Majestic Princess from Sydney to Auckland took the offer, moved up to mini suite from balcony and sailed on Regal Princess out of New York instead. The line also refunded the difference in airfare change, Ms Flatt shares on Facebook.

To take advantage of these offers cruisers need a flexible schedule and not be travelling in a large group with a few cabins booked.

Cruisers who passed on the offer often cited reasons such as work commitments and travelling for special events or with family.

Cruisers who have to fly out to their cruise also have to consider the cost of a change in flight and hotel arrangements. Tanya Sutton from Cairns declined the offer for her three-night Sydney roundtrip in September this year as she found that it wasn’t worth it.

“Our cruise was only three days and the airfares for two of us to fly to the port and back were triple the price of the cruise. The move over offered wasn’t worth it once we took in to consideration non-refundable flights and the non-refundable hotel for the night before embarking,” says Ms Sutton.

Tell us your “move over” stories in the comments below.