Salvatore Anello, the grandfather who has been charged with negligent homicide after the tragic death of his granddaughter,  has publicly spoken for the first time.

Speaking to the media for the first time since the tragedy, Mr Anello told CBS News that he is colourblind, and “that’s a reason that it might have happened.”

Mr Anello’s 18 month old granddaughter Chloe Wiegand fell from a window of Royal Caribbean cruise ship Freedom of the Seas while on a family holiday with her parents and grandparents in July this year. Mr Anello was holding her up to the window at the time of her fall, and says he didn’t notice the glass was missing from the window she fell through.

According to video taken on board the ship, which is yet to be publicly released, Mr Anello lifted Chloe up to the window in a manner she was used to at home – pretending to bang on the glass like she does at her brother’s hockey games.

But instead, Chloe fell more than 10 stories.

Mr Anello admitted to CBS News that he wouldn’t have been able to tell the difference between the windows next to the open section, as they appear to be tinted. Freedom of the Seas windows where Chloe fell

“I don’t know. I just never saw it,” he said in the interview. “I’ve been told that that’s a reason that it might have happened.”

Mr Anello, a USA citizen has since been formally charged with Negligent Homicide, despite Chloe’s parents blaming Royal Caribbean for the incident. Mr Anello now also blames the cruise line for the lack of signage indicating an open window and has urged them to fix the window.

If convicted, when he returns to court on December 17th, Mr Anello could face up to three years in prison.

However, Mr Anello told CBS News that the outcome of the trial ultimately doesn’t matter to him, because losing his grandaughter was “the worst thing ever.”

“Whether, you know, they find me guilty of whatever or not, it’s inconsequential, because … what has already happened is so horrible,” Mr Anello told CBS News.

Chloe’s parents, Kimberly and Alan Wiegand plan to file a lawsuit against Royal Caribbean. However, the cruise line says the incident is a tragic accident and declined further media comment. 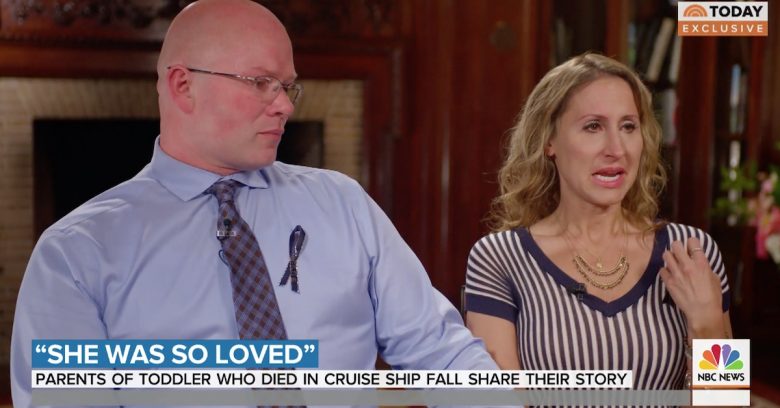 The family’s attorney has provided a statement to the Washington Post: “The family was pleased with Sam’s interview as it gave a glimpse into Sam’s love for Chloe and it also touched on what a special child she was. Sam’s interview further makes clear that this was a tragic accident and that there are no grounds for any criminal charges against Sam. It is the family’s wish that any and all criminal charges be dropped so that they can grieve as a family.”

During the interview, Mr Anello displayed his emotional struggle as he wept, and at one stage asked for a break to collect himself. Through his retelling of the moments that led up to the fall, Anello expressed the pain of his realization that his granddaughter was gone. In concluding the interview, Mr Anello said his worst pain is likely still to come, but for now, he says he just thinks of Chloe.

“It seems like it’s all not real. She’s such a beautiful little girl. Perfect little girl,” he said to CBS News.

Hannah Sampson contributed to this report.