Life above the Arctic Circle has to be tough and here in the little village of Kitsisarssuit, 250 km north of the polar line we get a glimpse of a real Inuit village and meet the people up close. 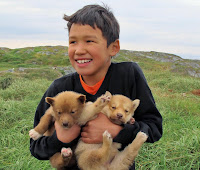 Boy and his puppies. The islanders no longer have use for dogs, so these are just pets nowadays (R Eime)

Just a couple of hundred folks live here on an island not far from the famous UNESCO World Heritage glacier near Ilulissat and their life revolves around fishing and hunting. We arrive by Zodiac from Le Boréal to a little sheltered harbour crammed with runabout-size fishing boats. Ugly scorpion fish, a wide ravenous mouth attached to a pointed tail and little else, congregate beneath the wharf.

The children play on a swinging pole or with their pet dogs. Because the fast ice no longer reaches the village in winter, they have no further use of dogs so the old wooden sleds lay rotting and abandoned along with fishing debris and plastic barrels strewn among the carcases of dead outboard motors. The latter seemingly have a very short life span in this environment.

There’s a little school and post office and a diesel power station. On the hill overlooking the village is an oversize microwave dish and radio outpost behind which is a cemetery that appears much larger than necessary. There are no roads, hence no cars, yet what appears to be the local taxi is a dinky ATV running shuttle rides along the paths.

Today the residents have set up a little tent for us and have some crafts and local delicacies on offer. One smiling man is gleefully cutting slivers of whale meat, probably minke, for the suspicious guests to try. He cuts me a tiny morsel about the size of the end of my little finger. I tried whale sushi in Svalbard some time ago and recall it was surprisingly tasty, but this offering reminds me of the muk tuk (cured whale blubber) I sampled in Siberia earlier. Both had the same effect (yuck) and it’s a taste that stayed with me the rest of the day.

You can read the naturalist guides’ reports at: https://blog.ponant.com > Expeditions