Then there are the amazing sunsets and some of the best food and wine in the country – no wonder more cruise lines are heading to WA.

Leading the charge is Cruise & Maritime Voyages. Its flagship, the stylish 1,220-passenger Vasco da Gama, will homeport in Fremantle for the summer 2019-20 season and again in 2020-21. CMV has curated a range of irresistible itineraries along the WA coast, taking in regional ports including Esperance, Albany, Busselton, Geraldton, Broome and Kuri Bay. These itineraries are available as part of a Buy One Get One Free offer that CMV is running until August 31. Cruises depart and return to Fremantle, making it perfect for both locals and interstate travellers looking to add a city break in Perth to their trip.

Your journey of discovery begins in Fremantle, a sunny, laid-back city where 19th-century buildings mesh with funky new cafes and a maritime feel permeates the streets.

Here, the tradition of a sundowner is deeply ingrained and local craft beer is almost a preoccupation among the locals. Fremantle is home to a growing number of local breweries; beer connoisseurs should make a beeline for the Sail and Anchor pub where you can choose from over 30 craft beers on tap.

The Little Creatures brewery, an established watering hole where you can take a guided tour, is another popular stop for locals as well as thirsty tourists. Coffee drinkers should make their way to Fremantle’s legendary Cappuccino Strip, located along South Terrace, which is abuzz with cafes, restaurants, live music and some of the best coffee the city has to offer. Walk down the strip towards Fremantle Market and meet the city’s famous street performers – you may even spot the Badpiper, the world’s only heavy-metal piper.

If you wish to take a trip into the bigger city of Perth, it’s just a half-hour drive
from Fremantle.

Fremantle Passenger Terminal in Victoria Quay is just a short 10-minute walk from the town centre, making it an easy start to your cruise journey.

Vasco da Gama will call at Geraldton, more than 400 kilometres north of Fremantle. The coastal city of pink lakes and prized seafood is emerging as a trendy beach escape where you can explore Aboriginal trails. The Yamaji Drive Trail includes 14 indigenous sites where you can learn about the local bush foods or swim in Ellendale Pool.

Fly over the 14-kilometre Hutt Lagoon which changes colour from pink to lilac purple, depending on the time of day and season, thanks to the algae in the water.

The clear waters of the ocean around Geraldton are flush with some of Australia’s best seafood especially the rock lobster, prized for its sweet, juicy flesh. For a taste, head to Skeetas on the waterfront, where rock lobster is always on the menu.

Further north is the resort town of Broome, renowned for the white sands of the 22-kilometre long Cable Beach, where you can take a sunset camel ride. Head to Broome’s historic Chinatown, which overlooks Roebuck Bay, a jumping-off point for tour cruises to local pearl farms. Discover how pearls are produced and watch pearl farming in action, or enrol in a pearl masterclass at Willie Creek Pearl Farm in the protected tidal estuary.

Vasco da Gama will make an inaugural visit to Kuri Bay on its Broome & Treasures of the North West itinerary this wave season. Kuri Bay, located in the remote fjordland of Western Australia’s Kimberley region, is home to the country’s first cultured pearl farm and the area now produces 60 per cent of the world’s large white South Sea peals.

On Western Australia’s south coast, Esperance is known for its incredible white sandy beaches and untouched coastal scrub. Drive along the 38-kilometre Great Ocean Drive and see countless sugary beaches and sculpted rock formations. The incredible bubblegum-pink Lake Hillier in the remote Recherche Archipelago, off the coast of Esperance, is accessible only by boat or scenic flight. 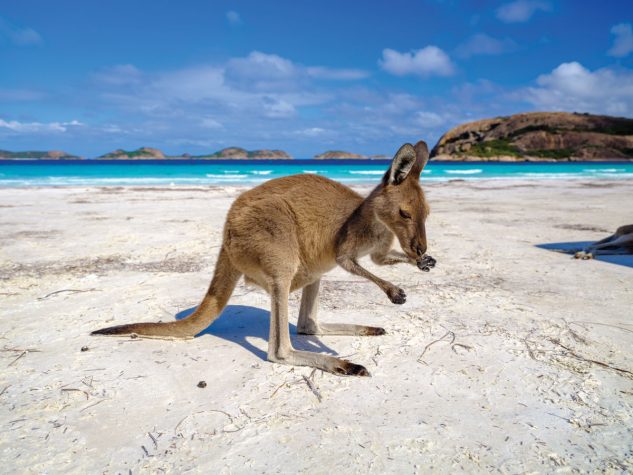 A kangaroo on the beach near Esperance

For a unique souvenir, stop in at Mermaid Leather, the only fish and shark leather tannery in Australia. These artisans repurpose skins leftover from the local fishing industry to create sustainable bags and wallets.

Heading further east, Cape Le Grand National Park is home to Lucky Bay, which has sand so fine it squeaks when you walk on it.

East of Esperance is the historical town of Albany, which enchants visitors with a view down the main street straight into the harbour from which the fleets of Anzac troops departed on their journey to Gallipoli in 1914. Founded in 1826, Albany is the oldest European settlement in the state, and heritage architecture, gracious churches and quirky museums dot the city.

Head to the Light Horse War Memorial on Mount Clarence for an incredible view over the waters of King George Sound and Princess Royal Harbour.

Despite having a population of only 20,000, Busselton has the longest wooden jetty in the Southern Hemisphere. The Underwater Observatory at the end of the 1.8-kilometre historic jetty gives an up-close glimpse into marine life. As you descend beneath the waves, you can watch life on Geographe Bay unfold before you without getting wet.

With a wonderful perch on the edge of the Indian Ocean, the clean and neat city is easily navigated on foot, and is the perfect hub for trips to the white sandy beaches, rocks, caves and forest of the region. For many, the pinnacle of their journey will be the stop at Cape Leeuwin Lighthouse, the tallest on the mainland. This white tower sits on Australia’s most south-westerly point, where the Indian and Southern oceans meet. National Geographic named it one of the world’s top three ocean views, and what a view it is.