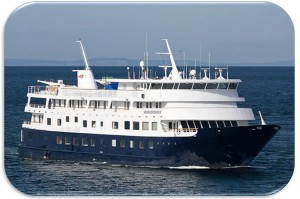 InnerSea Discoveries and American Safari Cruises have inaugurated two new vessels into their UN-CRUISE Adventures fleet ahead of the summer season in Alaska.

Safari Endeavour will carry 86 passengers and Wilderness Explorer 76 passengers when they commence sailings along Alaska’s Inside Passage from May through August 2012.

Both ships were welcomed to the fleet with a traditional maritime christening ceremony at the company’s Seattle office at Fisherman’s Terminal last Friday.

Also the godmother of UN-CRUISE Adventures, travel agent of 35 years, Ms Propper, is a long term producer for the company and has been recognised as an Alaska travel expert by Travel + Leisure and Condè Nast Traveler magazines for the last six years running.