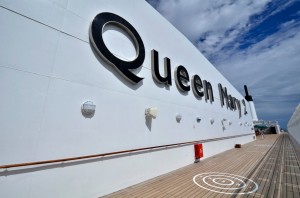 QM2 To Berth At Circular Quay

Cunard’s 151,400-ton liner Queen Mary 2 is set to make history again next week when she berths for the first time at the Overseas Passenger Terminal (OPT) at Sydney’s Circular Quay on Wednesday March 7, at 6.30am, for an overnight stay which will mark the end of her Royal Circumnavigation of Australia.

Sydney Ports Executive General Manager, Industry Relations and Logistics, Lachlan Benson, said it will be the biggest ship ever to tie up at the terminal.

“Sydney Ports has made a considerable effort to be able to accommodate the ship, including placement of a special heavy-duty anchor in Campbell‟s Cove this week, to ensure the 245-metre Queen Mary 2 is moored safely.

“Placement of this anchor was originally planned for later this year to cater for larger ships arriving in the 2012/13 season, but was brought forward at the request of cruise company, Carnival Australia.

The largest ship ever to visit Australia, Queen Mary 2 will be a spectacular sight in Circular Quay, stretching 345 metres along the foreshore and rising 62 metres above the water line – just five metres below the highest sail of the adjacent Sydney Opera House.