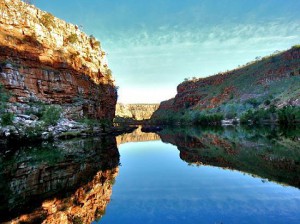 Cruisers have been told to get in quick if they want to go to the Kimberley in 2014, as many operators report unprecedented demand.

One operator is believed to have sold out the season, and a recent American webinar on the subject was seen by over 400 Americans – the biggest overseas audience for the area they have ever had.

The Kimberleys is one of Australia’s best-known environmental tourism areas, and is on almost every Australian’s bucket list of places to visit. But now there is enormous overseas interest in witnessing the natural phenomenon of the horizontal waterfalls and cruising close to Mitchell Falls.

Newcomers to the Kimberleys, Silversea Cruises are also witnessing strong bookings for their inaugural cruise to the untouched tourist destination.

Deploying the line’s newest ship, Silver Discoverer to the region in April this year, the line’s general manager and director of sales and marketing Australasia, Karen Christensen told Cruise Passenger two of five Kimberley voyages are completely full and a further two have limited space.

“Local voyages are always popular with Australian guests and we expect this trend to continue,” she said.

“Launching  Silver Discoverer is a very exciting time for us and we are confident in the product and the Australasian market.”

True North, one of the first cruise lines to sail the region say forward bookings for the Kimberley is always strong.

“Forward bookings are looking extremely healthy and have been since 2013,” a spokesperson said.

Lindblad Expeditions, recently purchased the National Geographic Orion and since the acquisition they’ve had a positive response on the Kimberley product.

According to the cruise line’s Australasia business development director, Jeremy Lindblad, there are currently less than 30 cabins remaining for the 2014 season.

“This is a result of the ever-increasing support from the Australian and New Zealand markets and enhancements we have made to the National Geographic Orion programs,” he explained.

For the chance to experience the Kimberleys, we’re giving away a 10-night Kimberley expedition cruise for two aboard the magnificent National Geographic Orion.