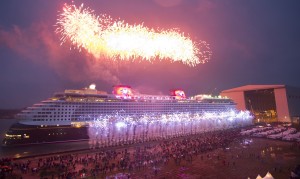 In true Disney style, new ship Disney Dream was floated out to a fireworks spectacular at the Meyer Werft shipyard in Papenburg, Germany, marking a major milestone in the fairytale ship’s construction when the exteriors are completed.

Thousands of spectators lined the shore to watch the float out celebration, which involved a fireworks display and a special appearance by Mickey Mouse and Donald Duck.

One prevailing question is who will be the new ship’s godmother? Any ideas?