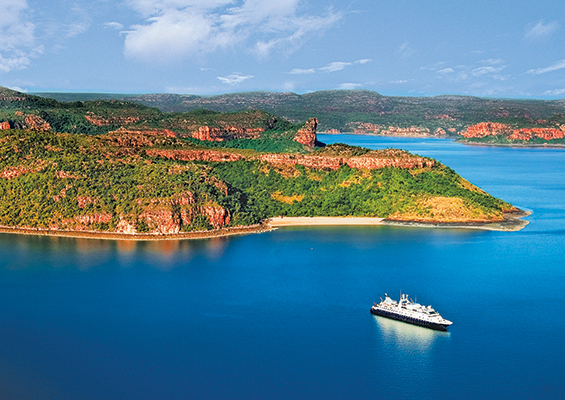 Jeremy Lindblad, business development director of Lindblad Expeditions has not ruled out its National Geographic-Orion ship will return to the well-trodden playground of the Kimberley and South Pacific in 2017.

This follows the company’s move to drop Australia and South Pacific itineraries next year to explore European and Scandinavian destinations instead.

The decision to reroute the 102-passenger vessel to Europe has been driven by persistent requests from repeat Australian and New Zealand passengers to discover other exciting parts of the world.

“The world is a big place. The vast majority of our past guests have been to the Kimberley and the South Pacific,’’ Mr Lindblad explained in an exclusive interview with Cruise Passenger.

“There are millions of places we would like to send our ships to. Our objective is to provide the most exciting, exhilarating and fantastic expeditions for all our guests, including those from Australia and New Zealand.

“About 65 per cent of our guests have already travelled to Papua New Guinea, Australia and Indonesia. The feedback from them is they want something new – this is already evident by the strength of Australian bookings for the other nine ships in our fleet this year which has outpaced the Kimberley bookings on the National Geographic Orion.’’

With more ships plying the Kimberley route, this may have contributed to the Lindblad Expedition’s decision to abandon the Australian itinerary.

“Our guests are not insular travellers. We are laser-focused on providing them with what they want, if not we run the risk of them booking on other ships,’’ Mr Lindblad said.

The vessel will now spend spring, summer and fall of 2016 to explore Portugal, Spain, France, England, Ireland, Holland, Belgium, the Baltic and Scandinavia on 22 one-week voyages.

In keeping with Lindblad Expeditions, the European voyages will offer prominent speakers and expedition leaders to talk about region’s modern and ancient history, political science, art, viticulture and music.

“These are exploration expeditions as seen through our unique Lindblad’s lenses – we will not only focus on the geography of Europe ad Scandinavia, we will also explore the culture and history of the region,’’ he said.

While European destinations are traditionally among the most popular itineraries offered by many cruise lines, Mr Lindblad said that his expeditions are different and unique.

Even without the release of the new European itineraries, Mr Lindblad said that “initial response from our Australian guests has been very strong.’’